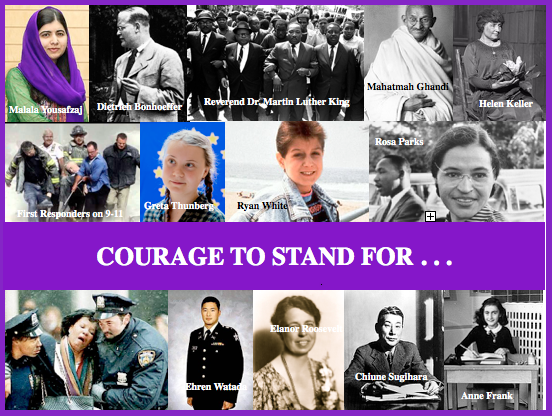 What do you stand for?

Let’s navigate this question together: Generously, openly, compassionately.  With no right answer yet with our unique answer. Each of us.  This calls for courage.

The root word in early forms of Latin and French for the word courage meant, “To speak one’s mind by telling all one’s heart.”

In the face of life’s difficulties and amidst society’s overwhelming changes  let’s explore the  courage to love more fully, to meet this challenge, to stand for this:  For your life.  For what and who you cherish.  A sturdy way to begin the year.

We will spend the morning in contemplative practice, restorative practices, and encouragement.   Bring your heart, your thoughts,  your emotions, you concerns, your enthusiasms, and perhaps something to share that has inspired you toward courage.  Details

FROM THE PHOTOS ABOVE:  Greta Thunberg is a school girl who addressed the United Nations and talks to people all over the worlds about seriousness of climate change.   in 1955 Rosa Parks refused to relinquich her seat on a public bus for a white passenger encouraging people to peacefully resist racism.  Dietrich Bonhoeffer was a Lutheran minister who spoke out agains tne Nazis and was executed for doing so.   Fr. Maximillian Kolbe was a priest and opponent of Nazism who volunteered to die in place of a stranger at a Nazi death camp.   Mahatma Ghandi employed nonviolent resistance to lead the successful campaign to end British rule in India and inspired movements for civil rights and freedom across the world.   Malala Yousafzai is Pakistani advocate for female education.  As a 15 year old girl she was attacked and shot in the head by a Taliban fundamentalist. She survied and has thrived while becoming the youngest recipient of the Nobel Prize.   Lt. Ehren Watada  was discarged from the US Army for refusing to deploy while saying he believed the Gulf War to be illegal and that it would make him party to war crimes.  Ryan White was an Indiana teenager diagnoed with HIV/AIDS from a transfusion.  He and his family faught to have him be able to attend school while the district refused his admittance without proof that his attendance would endanger others.  Chiune Sugihara was a Japanese diplomat in World War II who saved the lives of 6,000 Jews though it put him and his family in danger.   Helen Keller was a deaf-blind author, activist, and lecture promoting women’s sufferage, workers’ rights, antimilitarism, and other causes.  Elenor Roosevelt was a tireless advocate for the rights of minorities, the poor, and womens rights even though first ladies were seldom so committed.  Anne Frank was a young Dutch-Jewish Diarist who wrote about her and her family’s experiences while hiding in occupied Netherlands.  She died in a concentration camp.  The first responders on 9-11 offered themselves for others in incredible ways.  Of the nearly 3000 people who died in the twin towers over 400 were firefighters, police and emergency medical personnel.  Hundreds of the surviving first responders have lingering health problems as a result of their selfless acts that day.